The Van Alen Institute has announced the winners of Envisioning Gateway, including honorable mention for [un]natural selection, the submission from Archipelago Architecture and Landscape Architecture. Archipelago is the firm of Barbara Wilks, who is also a partner here at W Architecture.

Our proposal:
National Parks have historically been about preserving and protecting a place of scenic beauty&mdash;removed and ideally &ldquo;untouched&rdquo; by humans. Gateway is different. It is all about human contact with the environment and the resulting changes that take place over the centuries.

Our design celebrates the process of [un]natural selection. In the 21st century we are beginning to understand that human health and ecology exist within and not separate from the surrounding environment. Gateway, situated between the nation’s greatest concentration of humanity and the ocean, presents a special opportunity to explore the connections and tensions inherent in this amalgam of ocean, land, air and settlement. Our design strategy involves three overlapping steps. We want to re-orient the experience of the visitor from the fragment to the whole, restore elements we have lost or disturbed to create a new balance, and preserve those remaining elements which have cultural value.

At Gateway, the new identity of the park begins by uniting the various sites with the surrounding community, the water and the air above thru a simple waterfront pathway. This requires forming relationships with surrounding areas, while linking the parts to the whole physically and programmatically. Transportation linkages are also improved, to unify the park and connect it to the city. At Floyd Bennett Field, the two major water bodies of Gateway are united at the Airfield Orientation Center. Visitors leave their cars behind here, to explore and discover the overlapping web of influences of which they are a part. 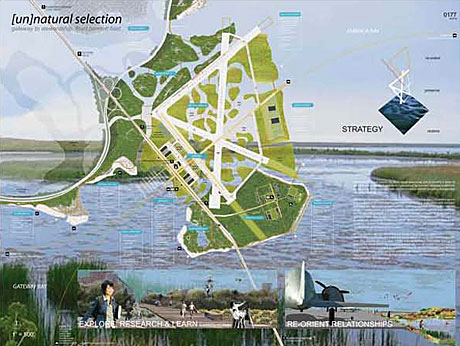