Barbara Wilks was featured in the June issue of Urban Land Magazine, as part of a Regional Spotlight on New York and Massachusetts. The Edge in Williamsburg, one of our landscape projects in the city, was pictured as well (above). From the article by Micheal Sheridan:

On the residential side, Barbara Wilks, a principal of Archipelago and W Architecture and Landscape Architecture, both New York – based multidisciplinary design firms, adds that New York is only just discovering its identity as a waterfront city, noting that the waterfront will continue to be a strong force in the real estate market. &ldquo;The trend is now to celebrate our location on the water and zoning has been changed to allow this in many areas,&rdquo; she continues. &ldquo;The design trend that complements this is the movement toward more ecologically aware structures and landscapes. In fact, there is a renewed focus on the importance of landscapes in the city and many new parks, especially waterfront public areas being developed.&rdquo;

Archipelago designed the open space for the Edge, a 1,442-unit multifamily development on the East River in Brooklyn’s Williamsburg neighborhood, whose first phase will provide 575 market-rate residences and 347 affordable units as well as 60,000 square feet (5,574 sq m) of ground-level retail. &ldquo;It will also provide over two acres [0.8 ha] of waterfront open space for the community, built by Douglaston Development for the public, including new piers and a waterfront promenade, streetscapes, and a park,&rdquo; Wilks says. &ldquo;Great care was taken to ensure access corridors through the development to the waterfront. The site plan becomes a reflection of the mixing of the forces of the city with the forces of nature, working toward a new balance that it is a hallmark of 21st-century design.&rdquo; 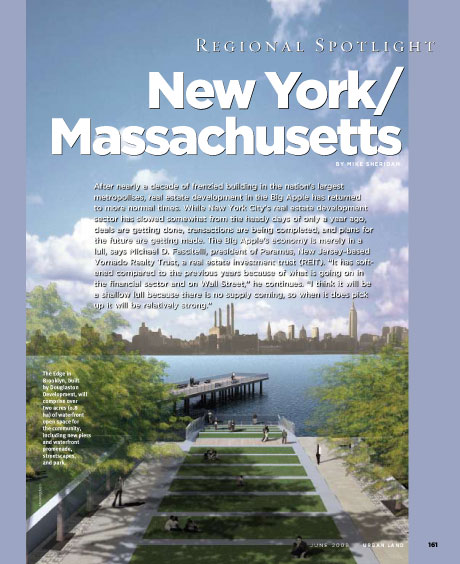