We are very pleased to announce the opening of the West Harlem Piers Park on the Hudson River in New York City.

West Harlem Piers Park turns a forgotten waterfront into a meaningful public space. It reimagines the site as a threshold between land and water, where both natural and urban forces come together to revitalize neighborhood life. Imaginative reuse of urban materials creates diverse spaces for recreational activities, social gatherings, and private reveries.

The design team worked in cooperation with the New York City Economic Development Corporation, the community, and neighboring institutions to create a revitalization plan for where Harlem’s &ldquo;Main Street&rdquo; meets the Hudson River. Central design elements include: the maximization of public space by narrowing a bordering street, the creation of a variety of soft and hardscape within the park, the integration of public art highlighting the waterfront’s history, the extension of the shore bikeway, the reintroduction of public piers for fishing and transportation, and the reclamation of under-utilized public space to create Harlem’s new gateway to the Hudson. 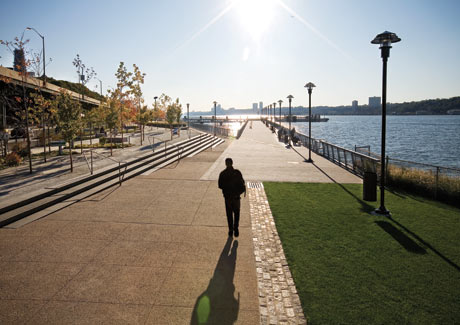