NY1 has just published a piece on the new park, designed by W on the Hudson River at 125th Street!

Construction on West Harlem Piers Park is nearly complete and has already received rave reviews from residents looking to escape the hustle and bustle of Manhattan, without leaving the island. NY1's Rebecca Spitz filed the following report.

It's hard to believe the idyllic pier runs alongside the busy West Side Highway. What was recently a supermarket parking lot, is now a crucial link in the Manhattan greenway.

“This is the missing link on the West Side waterfront. You can now get on a bicycle and ride from Dyckman Street all the way to the Battery without ever crossing a city street,” said Parks Commissioner Adrian Benepe.

Spanning an impeccably maintained two acres along the Hudson River, West Harlem Piers Park offers a little bit of everything. There are places to relax, works of art to explore and, of course, the namesake piers which the city actually built.

“It's always very expensive when you build on the waterfront, enormously expensive because you have to build structures that are capable of holding back the tides and the tides rip through here on the mighty Hudson, but it's worth every penny,” said Benepe.

The $20 million project was a collaboration between the parks department and the Economic Development Corporation.

About half of the money came from the city, the rest from a variety of federal, state and local sources.

“We think that it's a great down payment on the many improvements that are going to be coming to 125th Street over the course of the next several years,” said EDC President Seth Pinsky.

Park-goers say being close to the water is both different and relaxing, making the new spot a welcome addition to the neighborhood. And even though the subway is just a couple blocks away, some say being in the park feels like going miles out of town.

“This is just a beautiful view, you lose your mind in the beauty it's good,” said one New Yorker.

The next thing the city says it's hoping to bring in to the park — some kind of excursion boat operator to leave from the pier and might offer something like a daylong fishing trip or a sunset cruise. 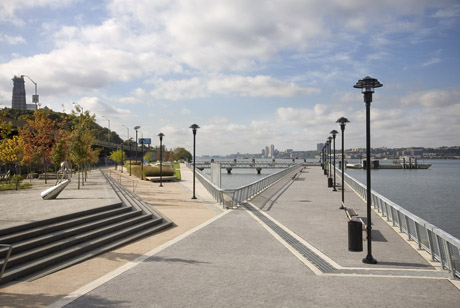