Last week, I traveled to Seattle for the 2009 Waterfront Center Conference and Awards Ceremony, where West Harlem Piers Park received a Project Honor Award. The ceremony was held at the Olympic Sculpture Park at the Seattle Art Museum on Friday afternoon and featured a wide variety of projects – from planning and resorts, to transportation and public works projects. The projects were inspiring, especially the Beach Restoration in Quinhuangdao City, China, and I was honored we were included among them.

The interdisciplinary jury chose to recognize West Harlem Piers Park in part because of the extent to which the community was involved in its design and conception. We had brought together over 40 different organizations in working group sessions. As a result, there is a feeling of community ownership and it has been extremely popular with a large variety of users. The jury also noted the importance of this park in reconnecting the neighborhood to the water. 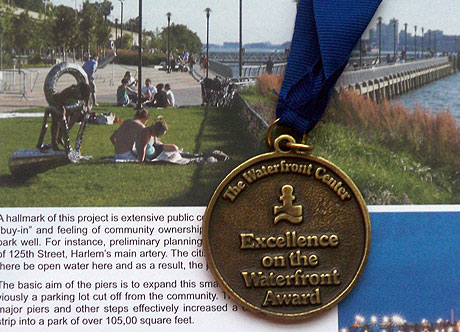