W Architecture will be featured in an upcoming exhibition at the City Museum of New York, Minds in the Gutter: Storm Water Management. Our proposal Marine Edge focuses on re-envisioning the street ends that terminate at the water’s edge in all 5 boroughs on approximately 25% of the shoreline. We envision these dead-ends as “marine streets” -a new street typology- a critical edge which would mitigate both the upland urban runoff and the climatic tidal surges while providing residents with a heightened awareness of the maritime city in which they live. Functioning ecologically much like the natural wetlands that used to be prevalent here, the streets would remain accessible for human use due to careful planning and design, including walkways constructed above the flood zone. These improvements could be made now, concurrent with or prior to planned development, providing a means to improve the environment within the existing redevelopment framework.

The opening event to the exhibition will feature a panel discussion including W principal, Barbara Wilks. The event will be held on Thursday April 22, 2010 at 6:30 PM and is co-sponsored by the Design Trust for Public Space. 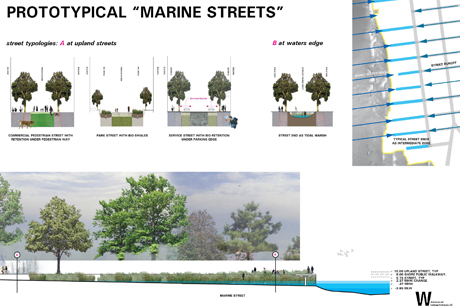