Over the holidays in Ohio, I witnessed the devestation of Pyramid Hill from the Emerald Ash Borer. Over 1,000 dead ash trees are being cut down and burned–large areas of the park's 300 acres are now deforested. It is horrifying!

On December 24th, a quarantine was announced for just Pyramid Hill's county for Black Walnut wood. The Walnut Twig Beetle, which causes Thousand Canker Disease, has been identified here, and this incurable disease will kill the trees in three years. Pyramid Hill has hundreds of Black Walnut trees as part of its Oak Hickory Forest. Black Walnut trees are a $1.2 billion industry in Ohio.

Our chestnuts were ravaged in the 1920s, elms were diseased in the 1980s, now ash and soon walnut. We need to care for and defend our forests! – Barbara 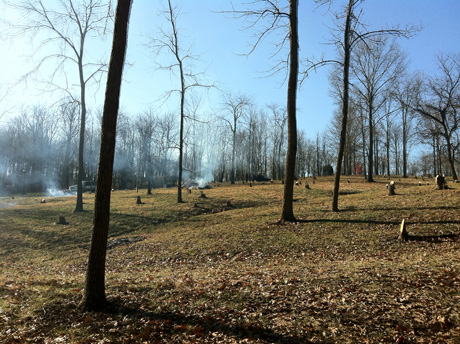